This is going to be a long post. I want to put all information, we have so far regarding the ESEA/NCLB renewal, now dubbed the “Every Student Succeeds Act” (ESSA) in one place. Given that it is over 1,000 pages of legal ease, and it has only been available for 6 days, we know that there will be other issues.

Sen. Lamar Alexander and Sen. Patty Murray came together and decided that there needed to be a renewal of NCLB now. Due to the differences in the bill, a Conference Committee was put together to hammer out those differences into one bill that both houses could agree on.

Knowing this was conference committee was meeting, and making deals and working hard behind closed doors, more than 200 grassroots groups and experts from 46 states came together and sent a letter to congress expressing concerns and opposing any conference report based on the two bills.

On November 19, 2015, the Conference Committee met to amend and approve the conference report. At the conclusion of that meeting, it was announced that the full text of the bill would be available on November 30, 2015 and the House would vote on the bill December 2nd, December 3rd at the latest.

What? Less than 72 hours to read a bill that will affect nearly every child and family in the nation? I thought Speaker Paul Ryan had said that with his leadership in the House, these types of tactics were over. So we waited. On November 30, at 9:30 am, S1177, the “Every Student Succeeds Act” (ESSA) full text was made public. It is a whopping 1,061 pages of federal regulation and programs. And yes, the House will have a floor vote on ESSA on December 2. Seriously? 1,061 pages to be read and analyzed by all representatives in less than 72 hours? How could they possible know exactly what they were voting on? How could parents and the general public possibly have the opportunity to read and digest what changes the federal government wants to make to their child’s education?

The committee knew this would be an issue, so the Education and Workforce committee put out a bookmark with the “Top Ten Reasons” this bill is a win for Republicans.

Congressional leadership knew that this bill had to be voted on quickly. If parents were given a chance to read this bill, there would be public outcry that congress would not be able to ignore.

What the committee didn’t count on was parents and education experts from across the nation coming together to research S1177. Dr. Karen Effrem, Florida Stop Common Core Coalition put together a rebuttal to the “Top Ten”.

Top 12 concerns about the Every Student Succeeds Act (ESEA reauthorization):

You can read the paper in its entirety here.

Sen. Mike Lee, in a floor speech on November 18, 2015 had this to say about the conference committee process:

So from the surface, it will still look like the conference process is happening the way it’s supposed to.

But beneath the surface we know that all of this has already been pre-arranged, pre-cooked, pre-determined… by a select few members of Congress, working behind closed doors, free from scrutiny.

And we know that this vote was scheduled on extremely short notice, so that it would be difficult – if not impossible – for the rest of us to influence the substance of the conference report through motions to instruct.

Even state legislators got involved in fighting the deception.

Georgia State Senator William Ligon, penned a letter to Speaker Ryan and all members of Congress.

As a State Senator, it never ceases to amaze me how often our federal officials easily overlook the constitutional principle of federalism and the U.S. Constitution’s guarantee that the States have a republican form of government. This lack of constitutional integrity is especially true in the arena of education. As someone who has taken the lead in the Georgia Legislature on attempting to restore state, local, and parental sovereignty over education, I recognize that the real obstacle is the federal government.

You can read the full letter here 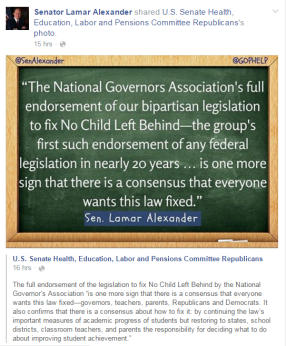 You see, all the education organizations, including the NGA, CCSSO, Great Schools, and PTA have endorsed S1177. The fact that the NGA and CCSSO, the copyright holders of the Common Core State Standards, endorse this legislation that we have been told does not mandate the Common Core, is a red flag.

And just in case you were wondering about how Common Core plays into this bill. Here is Rep. Tim Ryan on the House Floor during debate on Dec. 2.

ESSA, just like Common Core is not about academics. It’s about values, beliefs, attitudes, grit, tenacity and perseverance. It is about the psychological profiling of “higher order thinking skills” to create a cradle to grave, state run, interoperable data system for each and every child to align them to the workforce.

The renewal of ESEA/NCLB, now dubbed the “Every Student Succeeds Act” (ESSA) sailed through the House of Representatives with a vote of 359 to 64. Rep. Kristi Noem stood with the Obama administration and voted “YES” on this bill. I know that seems harsh. Let me explain.

On Friday, Dec. 4, Education Secretary Arne Duncan put out this statement regarding passage of the ESSA in the House. The following is a quote from that statement:

But yesterday, the U.S. House of Representatives finally answered the overdue notice and took action to revise and replace No Child Left Behind. This bipartisan plan — the Every Student Succeeds Act (ESSA) — is good news for our nation’s schools. It is a compromise that builds on the work already underway in states to raise expectations for students and to help them graduate college and career-ready. The bill reflects many of the priorities we’ve put forward over the last six and a half years. (Emphasis mine)

S1177 strengthens NCLB and codifies what the Obama administration has been doing through executive fiat for the past 6 years.

This bill now moves to the Senate in the coming week. We don’t have an exact date yet for the vote. It is vital that you contact Senators Thune and Rounds and tell them to vote NO on S1177. The education lobby has spent big money to get this bill passed. Our senators hear from them every day. They need to hear from you and you need to contact them more than once. You are the lobbyist for your children. There is nothing more important than our children.

2 thoughts on “S1177 Every Student Succeeds Act: The Deception and the Facts”