I have heard from many parents who are experiencing first hand the problems with math being taught as a concept to the young child who is cognitively not ready for concepts. Math class is no longer about knowing your math facts.
Common Core changes everything about education. The percentages and the letter grades of the past are gone. In the Sioux Falls school district as with most other districts in the country, they are now using a system of one to four. One being the lowest and four being mastering the concept. That’s important. We are no longer grading young children based on knowing their math facts.  It is not that important that they know math facts. It’s more important they know the why.
A Sioux Falls second grader was doing her homework and became exhausted with the process of always “why” or “how”. She knew what the answer was. And in her mind, this is why the answer of 25-6=19. Notice she received the lowest grade possible, even though her answer was correct. This is the math that is aligned to the Common Core. 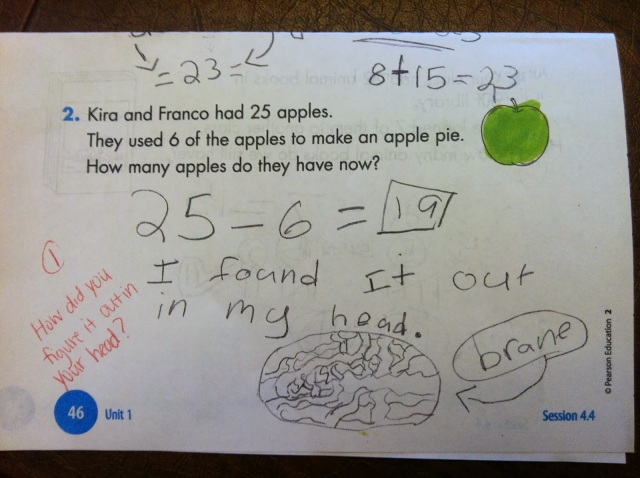 I’m sure we can all imagine how this little girl felt receiving such a low grade in spite of having the correct answer to the story problem. I do have to wonder how teachers feel about having to grade using this new system.
Tell me again how the Common Core is just Standards…

Update: October 2, 2013
The parents of this child have asked if they could add a statement to the story. I am more than happy to do that. Their statement is as follows.

We are the parents of the child who answered this math problem. What is especially frustrating is that we know it is pointless to speak with the teacher about this. In fact, we LOVE this teacher, and we don’t blame her in the least for the comment she made and for the score that was given. She was simply doing what the standards and the curriculum require, whether she believes it was the right thing to do or not. We also know it would be pointless to bring our concerns to the principal, the superintendent, or anyone on the school board, unless those conversations would somehow move us closer to convincing our state to abandon its adoption of the CCSS. Short of that action being taken, it has become distressingly apparent to us that all of us on the local level are, and will continue to be, powerless to affect any change in what our children are being taught and how they will be evaluated in math and language arts.